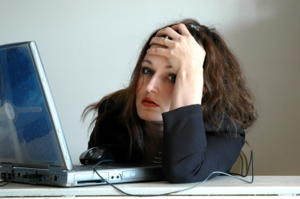 I have been cleaning up my office, including file drawers, and in the process pulled out a real treasure I’ve been keeping for over 20 years. It’s a test transcript done by someone hoping to work for me back in 1990. It was so memorable, I kept it. It’s now in the shredder, but it got me thinking about how medical transcription ended up where it is today.

When I pulled this test out of the file folder, I started to laugh. I had even stapled the woman’s business card to it. Not that I needed it, because I distinctly remember her, and that day. She responded to an ad I placed for medical transcription contractors. I was drowning in work from a local hospital. She told me she’d been doing transcription for over 10 years, and she even taught medical transcription at a local vocational center. Fantastic. I thought I had a shoe-in.

Here are some of the highlights from her transcription test:

And those are just the better parts. I never verified her work experience (obviously, there was no point), but it frightens me to think that this woman might actually have been teaching others how to do medical transcription.

This was not an isolated incident, it was just the most memorable. In the same file, I have a report transcribed by a long-forgotten MT. I probably stopped marking corrections after the first page because it’s the only page marked up.

T: Yesterday evening, she had to Margarita’s and some bay leaves.

I’m not even going to note the corrections to that – I think most readers can figure it out all by themselves.

There were very few formal education programs for medical transcriptionists at that time. Many MTs trained on the job. If they were taught by someone who had been a medical transcriptionist for years,  there was just an assumption that the person doing the training was qualified. In many cases, that was true. Unfortunately, in the rest of the cases, it was a case of the blind leading the blind. In my experience, for every medical professional in the documentation chain who knows how to spell all the words, actually reads the reports and requests/demands corrections or fills in the blanks, there are hundreds who don’t. If nobody ever tells you what you’re doing wrong, how do you improve?

If the standard measure of a qualified MT was number of years without any complaints, then the MT world would be populated with nothing but fabulous, qualified MTs.

Also in my archives is a transcript of a very (very!) old chat from the MT Daily chat room. I’m going to be surprised if any of my readers actually remember much about this site, and the chat is from 1999. The owner of MT Daily was a proponent of self-teaching, mentoring and on-the-job training for MTs. In the chat, she refers to “supraprofessionals” and “over-trained MTs.” IS there such a thing?? It seemed to me that she never quite understood that the criticism directed at her was not because she was self-trained, but because she actually promoted what many of us considered to be lower standards. There’s a problem with the approach of being promoted: nobody was making any effort to ensure that the mentors and on-the-job trainers were qualified in any way.

If medical transcriptionists had been required to complete specific education requirements and become certified or licensed, and if all medical transcription in the U.S. was required to be done by licensed and/or certified professionals, we wouldn’t be talking (as much) about quality issues and declining compensation. But the door closed on that probably before I even stepped into my first medical terminology class, so let’s not get hung up on what-ifs and might-haves.

Resistance to the CMT credential was based largely the argument that it wasn’t a guaranty, much less indicator, of a qualified MT. You could’ve retired if you collected a dime every time an MT said “I know a CMT and she’s the worst transcriptionist!” Ironically, I never met an MT who thought someone might be saying the same about her.  By the way, I include myself in my criticisms. I have no delusions about my own beginnings and journey in medical transcription. Forever in my memory is the day I attended a one-day seminar put on by HPI (Health Professions Institute). I was running my own medical transcription business, and had about 10 MTs working for me. Looking back, I realize I was pretty wet behind the ears. I had completed a series of medical terminology and medical transcription classes, worked for almost a year at a local hospital, and part-time for a local transcription service. I thought I was not only fully qualified, but a good MT. We were having lunch and Sally Pittman was sitting at my table. I will never forget the look of horror on her face as I blithely said I capitalized all drug names because it was easier (and faster) than looking them up to see if they were brand name or generic. (Also, at that time, the American Drug Index, which was about the only reference book, printed all the drug names in a small caps font, making it difficult to differentiate generic from brand. But that’s my only excuse!) And that was the result of MY on-the-job training and mentoring. Years later, when I obtained my son’s radiology report from the local hospital, I found it was full of errors, including an elbow with possible genital abnormalities. I knew the transcription service owner who had mentored me transcribed for that hospital. And there, at the bottom of the report, were her initials.

I’ve told the MTs who worked for me “if it doesn’t make sense when you type it, go back and listen again!” I mean – really. A little bit of uncommon sense (common sense is not that common) would seem to be a basic first line in assuring accuracy. I have never understood how someone can type complete and utter nonsense and then defend it to the person pointing out the error. The most frequent first defense is: “That what the doctor said!” Oh sure – the doctor said a drystill dressing was applied? What is a drystill dressing, anyway? “I don’t know – but that’s what he said.” You can’t improve if you aren’t willing to admit you don’t know everything, or that you’ve made a mistake.

If you’re going to type with no more intelligence than a speech recognition program, guess what? You’ll be replaced by a speech recognition program. If the job you do isn’t appreciably better than the job done by someone in a country where people will work for a fraction of the pay, guess what? You’ll be replaced by someone cheaper, regardless of where they live. If doctors and hospitals decide they have to accept hamburger because that’s all that’s available, they won’t be willing to pay much for it.

f you look at it from the medical professional’s point of view, many of them were paying more and not getting more. Changing transcription services is a pain, which is why many are willing to continue getting mediocre service. If they’ve made the effort and switched, only to find no appreciable difference in quality, which happens too often, they become reluctant to switch again. After all, why bother? They’ve given up believing that there are any transcriptionists or transcription services doing better work. Then, they discover a good reason to make a switch: price.  They found they could pay less and get no better/worse. And there’s always someone willing to undercut everyone else’s price. As overseas transcription entered the market, the race to the bottom was on, not only in price, but in quality.

And that, folks, is my take on how the medical transcription industry got where it is today.