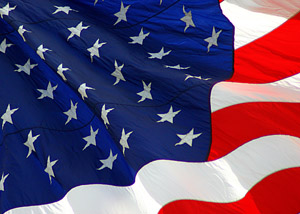 Being the digital packrat that I am, and being a subscribing member to historic domain name ownership records, I think I can adequately answer that question. 🙂 And it's a good review for everyone who wasn't around in 2008, when there was a question regarding the site ownership. And, I hope, an eye-opener for all the flag-wavers over at MT Stars who seem to believe it's a site that supports medical transcriptionists against offshoring work.

The domain name was registered on August 5, 2002. While the domain registration history isn't available quite THAT far back, it is available beginning on May 19, 2003.

What's interesting about this information is that although the domain name is registered to Zeshan Ahmed, the address and telephone number are in Glendale, Arizona – which is near Peoria, AZ, where Sheri Steadman lives (or lived at the time). In a public post at MT Stars, Dr. Ahmed explained his involvement with Sheri Steadman (more on this later) and how he lived in Arizona for a short time. 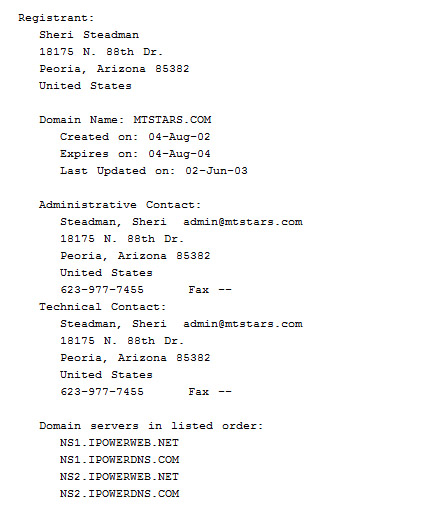 Back to that post at MT Stars where Dr. Ahmed explains what happened… this post has been removed from the MT Stars site. Isn't it fortunate that I happened to have printed it, as well as Sheri Steadman's relevant posts on the internet, to a PDF file at the time it was available?

On February 27, 2008, Sheri Steadman posted at MT Stars that the MTStars.com domain name had been hijacked and taken over by an offshore entity. On March 3, 2008, she posted at MTStars.net that Dr. Ahmed “turned the site over to me” when he returned to Pakistan. She claims he was selling space on her server without her knowledge or consent, and she ended their relationship. He then “took the site over.” I'm not sure quite how that happened, when the domain name was registered in her name, unless he had access to the domain name registration account. 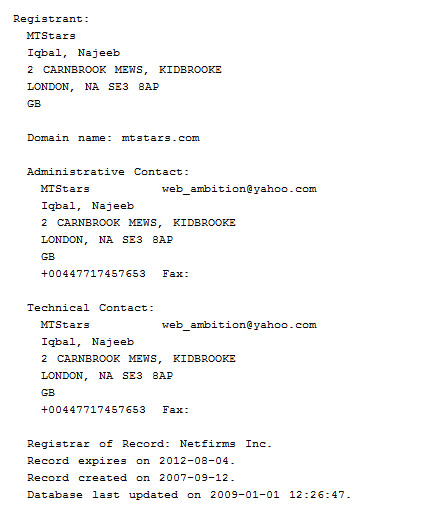 I'm not sure if the registrant above is the friend Dr. Ahmed refers to, but this registration information is almost a year past the date Dr. Ahmed states the site would be sold back to him. There's no way of knowing when the ownership was transferred back, because the privacy veil was drawn again after only 2 weeks.

Let me tell you why I find all this blog-worthy (because I'm sure you're wondering!). I'm blogging it (a) because I was asked about it and (b) because I love irony, such as:

All this anti-offshore stuff gets rather murky, doesn't it? I guess if you're Sheri Steadman, it's not okay to put US medical transcriptionists out of work by offshoring work – but it's okay to put US web developers out of work by offshoring work. And if you're a medical transcriptionist who is against offshoring work, I guess it's okay to post that at your favorite site – even if it's owned by one of the same people participating in doing the very thing you're against. As long as it's convenient, of course. And I guess if you're the American Transcription Association, it's okay to pay someone in Pakistan for advertising on their flag-waving site, because it gets your message out to the right people.