Home »Medical Transcription Exchange»Long ago, in a galaxy far, far away

… there was the Usenet. And the Usenet is/was the Wild, Wild West of the internet. And the medical transcriptionists who wandered through the pre-GUI (that’s graphical user interface, to those of you who don’t remember what a C-prompt is!) internet got tired of not having their own space in the Usenet and therefore they put together a charter (for that’s how a new Usenet group was formed) and the charter was voted upon and passed and the MTs did have their own Usenet group: sci.med.transcription, which became known as SMT. (For a copy of the charter and other information about SMT, please refer to the SMT Frequently Asked Questions.) Amazingly, at that time, AOL did not allow its users out to play on the internet – they were restricted to AOL’s proprietary space. And there was a thriving community there, of which many of us knew little unless an AOL user also happened to have a shell account outside AOL. At some point, AOL did allow its users access to the Internet and the MTs of AOL joined the MTs at SMT, reveling in the unmoderated world of Usenet. And there was cussing and discussing, friends made and enemies made, alliances formed and broken, theories expounded, trolls and flames and asbestos underwear (virtually speaking).

When I got on the internet, there was no World Wide Web (WWW). Nope, none at all. I bought a book on how to navigate the internet and there was one whole page devoted to the WWW – which, at the time, was only a discussion, a gleam in someone’s eye. I remember spending hours gophering through nodes on the internet to find material, which I then had to print because you couldn’t download and save it, or bookmark it for later, and heaven knows it took long enough to find it in the first place! I also spent hours on Usenet, getting in lengthy and heartfelt discussions with people I was never, ever going to meet. Quite frankly, at this point I don’t even remember any of them, and I stayed up much too late on too many nights just to read and post.

Online is where I’ve met most of my MT friends (ok, and a couple of frenemies).

Taking over at MT Chat has really put me in a reflective mood at how much the internet has changed, how much all of us have changed and how medical transcription has changed, so I went tromping through the Ancient Archives, some of which I’m going to share. Some of these are really funny – as in, OMG I can’t believe I/we/someone said that! But we did. And either we’ve changed or MT has changed but one thing that was great about the Usenet – your words lived on!

So here goes, folks – goodies from the SMT archives! At the risk of revealing how long some of us have been on the internet…

Just in case you were wondering if the question “can you work at home with children” has come up before, here’s a post from December 1996: 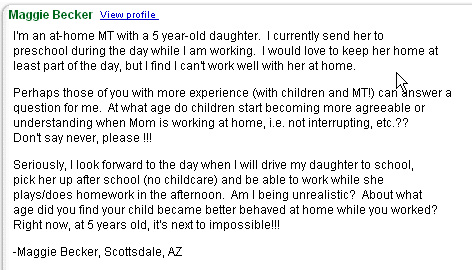 In general, the response to Maggie was positive – most of us worked at home. Funny how I didn’t notice at the time how many of these were from women whose children were grown! 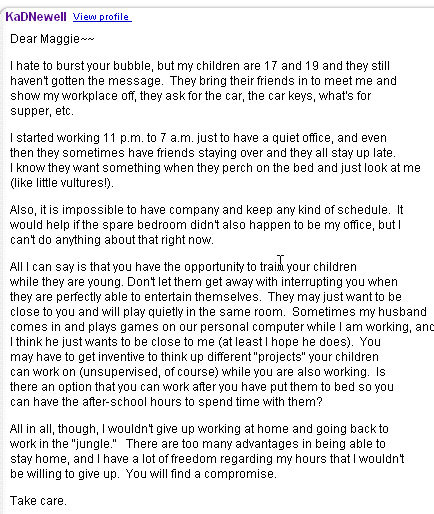 And the answer I thought was funniest (and, sadly, probably too apropos!):

I hope my readers are enjoying this blast from the past as much as I am and if the response is positive, I’ll keep digging through SMT. I’m sure there’s more than a few things I’ve said there that I’ll be embarrassed about now!

1 thought on “Long ago, in a galaxy far, far away”