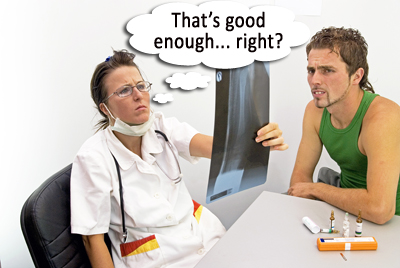 I wrote a detailed post analyzing a discussion that took place in several places across the web, including the NEMT blog, Facebook and LinkedIn.

Then, I decided it was all too complicated to follow. I’m just going to boil it down and include links at the end for those who want to go view the original discussions and posts.

Basically, the conversation started with a blog post at the NEMT blog, which was cross posted to the LinkedIn Health Story Project group. There were claims that offshoring is solely responsible for decreased pay rates for medical transcriptionists, and (alternatively) that speech recognition can preserve transcription by making it less expensive. The pertinent point of the discussion (for me, at least) was when a vendor confirmed what I’ve already been hearing from medical transcriptionists: essentially, in order to meet the need to train the speech recognition engine to be more accurate, editors are being told to throw style out the window and that editing for style (clarity?) slows down the process and adds to the cost.

Follow the link below to the Facebook posts by MTs4EMR (I really recommend following her if you’re on Facebook), where there’s a series of posts titled Good Enough. Seriously.

So what’s the upshot of my opinion after reading all this?

If speech recognition is all about serving the technology, rather than the technology serving us, and economics are the most important factor, then speech recognition editors bring no intelligence to the table and editing is just a clerical function and it will pay clerical wages. All the arguments that medical transcriptionists are essential because they bring intelligence to the documentation process and improve the quality of the record become moot.

The servitude to technology continues and even expands with the EMR. Like speech recognition technology, the EMR is being sold as a cost-saving replacement for medical transcription and the narrative record that does so much more than paper records ever can. And that part is true – the EMR potentially has a great many advantages over paper records. But the technology is forcing a record that’s good enough. Speech recognition limitations are forcing a record that’s good enough.

I’m going to be the last person to say that every last comma is essential to an accurate record. I find it amazing, however, in a world where standardization is considered not just good, but essential, that standardization in medical records produced by speech recognition is exempt. And why is it exempt? Because the technology doesn’t support it. Because not conforming to standards is cheaper. There are good reasons for standards and style guides. How many of us can read and understand Olde English? My point exactly. Standards are in place for clarity in communication. Without them, language deteriorates and understanding deteriorates with it. The AMA apparently thinks style is important – their Manual of Style is extensive. Now, that manual is for journalistic publications, but I just don’t picture the professional medical journals accepting submissions that don’t conform to the standards of style, regardless of their value, just because the submitting physician(s) found a cheaper typist. (Oh well – if you got it cheaper, then that’s okay! It’s good enough!)

I’m all for saving money, getting value, etc. But let me tell you something – when I decided to have LASIK correction, I didn’t pick the cheapest clinic. I could have had it done at one of the many places advertising LASIK correction for $250 an eye. Instead, I chose to have it done by a well-known and respected pioneer at UCLA medical center and it cost me $2500 per eye. Why? Because it’s my eyesight. I’m a bit aghast at the idea that good enough is considered acceptable when it comes to people’s lives.

I also understand that healthcare dollars are constantly being squeezed. My husband is in healthcare finance and every time I complain to him, I get a very reasonable, point-by-point explanation of what’s happening inside a hospital’s finance department. My question is – where does it all end? Maybe I’m being a bit extreme when I say “today it’s the medical records – tomorrow it’s going to be the guy reading your x-rays.” How many times are healthcare providers and administrators and bean counters (oh no! I did not just call my husband a bean counter!) going to say good enough and how far will they carry it?

The next time a provider is trying to decode a poorly-constructed medical record, I hope he or she keeps in mind that someone decided it was good enough. In the meantime, for medical transcriptionists, I suggest you keep in mind that as long as good enough is the operating ideology in medical records, pay rates for medical transcriptionists will not improve. If we are not allowed to contribute intelligence to the process, we have little, if any, value to the process.